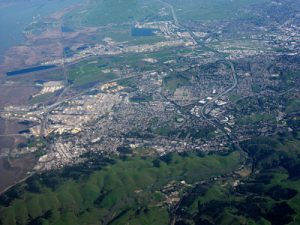 Aerial photo of the City of Martinez, facing east, with Carquinez Strait on the left side and Highway 4 running up the right side by Dcoetzee (Own work) [Public domain], via Wikimedia Commons

The City of Martinez was granted certain sovereign lands in trust in 1851. The grant to the City was repealed and re-granted in 1976 and 2014. In 2014, the previous grant and amendments were repealed and a new statute was enacted granting the City four trust land parcels, which include the marina. The City must use the land for purposes consistent with the public trust doctrine and, beginning in 2020, in conformance with a trust lands use plan approved by the Commission.

The City is required by Sections 4 and 5 of Chapter 628, Statutes of 2014, to submit a Trust Lands Use Plan by January 1, 2020 and a report of trust uses every five years thereafter, beginning September 30, 2025. The reports will be posted here when available.

The City is required by Section 6306 of the Public Resources Code to complete an annual financial statement and standardized reporting form for trust lands. In addition, Chapter 628, Statutes of 2014, requires including a summary explaining how the City is using trust revenues to revitalize the marina and prevent its closure.