About the California State Lands Commission

Established in 1938, the Commission manages 4 million acres of tide and submerged lands and the beds of natural navigable rivers, streams, lakes, bays, estuaries, inlets, and straits. These lands, often referred to as sovereign or Public Trust lands, stretch from the Klamath River and Goose Lake in the north to the Tijuana Estuary in the south, and the Colorado River in the east, and from the Pacific Coast 3 miles offshore in the west to world-famous Lake Tahoe in the east, and includes California’s two longest rivers, the Sacramento and San Joaquin.

The Commission also monitors sovereign land granted in trust by the California Legislature to approximately 70 local jurisdictions that generally consist of prime waterfront lands and coastal waters. The Commission protects and enhances these lands and natural resources by issuing leases for use or development, providing public access, resolving boundaries between public and private lands. Through its actions, the Commission secures and safeguards the public’s access rights to natural navigable waterways and the coastline and preserves irreplaceable natural habitats for wildlife, vegetation, and biological communities.

The Commission also protects state waters from marine invasive species introductions and prevents oil spills by providing the best achievable protection of the marine environment at all marine oil terminals in California and offshore oil platforms and production facilities.

The Environmental Planning and Management Division provides policy and technical analysis to the Commission and its Executive Officer and ensures compliance with the California Environmental Quality Act (CEQA). The Division prepares Environmental Impact Reports, Mitigated Negative Declarations, and other environmental or public trust documents for land use changes within the Commission’s jurisdiction, and routinely comments on CEQA documents prepared by local, state, and federal agencies for projects impacting public trust lands and resources.

The Information Services Division provides secure, reliable, and efficient computing services enabling the Commission to conduct business effectively. The scope of services includes workstations and laptops, phones, cloud collaboration services, a secure server and network infrastructure, and applications for employees and the public.

The Land Management Division has primary responsibility for the surface management of all sovereign and school lands in California. This includes the identification, location, and evaluation of the state’s interest in these lands and their leasing and management. Sovereign lands encompass approximately four million acres and include over 120 rivers and sloughs, 40 lakes, and tidelands and submerged lands along the more than 1,130 miles of coastline and offshore from the ordinary high water mark to three nautical miles offshore. School lands are generally located in the California desert and are what remains of the nearly 5.5 million acres granted to California by Congress in 1853 to benefit public education. The Commission manages the surface and mineral ownership of hundreds of thousands of acres of school lands.

The Legal Division’s staff attorneys provide legal advice and support to the Commission, to the Executive Office, and to the other Divisions of the agency. Staff attorneys interpret, apply, and provide advice concerning statutes, regulations, and case law governing all aspects of the ownership, management, and use of lands under the Commission’s jurisdiction.

The Marine Environmental Protection Division regulates and inspects all marine oil terminals in California and bulk oil operations at these terminals to provide the best achievable protection of the public health, safety, and the environment. Inspections are conducted on a daily, biennial, and annual basis and include marine pipeline inspections, review of oil spill prevention requirements, and operational personnel training. The Division also regulates large oceangoing vessels to protect against the introduction of invasive (nonindigenous) species into state waters.

The Mineral Resources Management Division is responsible for the safe and environmentally sound development, regulation, and management of all energy and mineral resources on sovereign and school lands under the jurisdiction of the Commission. These resources include oil, gas, geothermal energy, gold and other solid minerals. In managing the prudent development of these resources, the Division’s highest priorities are public safety, environmental protection, and maximizing revenue generation.

History of the Commission 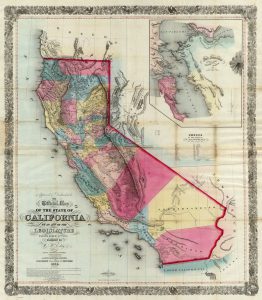 Map of the State of California by Surveyor General William M. Eddy.

The office predating the Commission was created in 1849 and known as the Surveyor-General. The Surveyor General, a constitutional officer elected by the people, surveyed and mapped the boundaries of state sovereign land, determined the state’s mineral resource potential and determined its agricultural and domestic animal population. The Surveyor General was also the engineer and commissioner of improvements to roads, canals, timber resources, draining of marshes, and irrigation project development. The office was abolished in 1929 and its responsibilities were transferred to the Department of Finance and its Division of State Lands.

In 1937, serious irregularities surfaced regarding the execution of a boundary line agreement in Malibu, settlement of trespass litigation that had been brought against Union Oil, and the issuance of permits for oil drilling in Huntington Beach. The Personnel Board charged and dismissed a Division Chief and Petroleum Production Inspector from state service. The necessity of an independent commission that makes its decisions in public was made apparent by the behavior of these individuals. Because of this malfeasance and the significant controversy surrounding the state’s management and development of its oil and gas resources, and because of a desire to create a high level and autonomous board to make its decisions in a public forum, the State Lands Act was established in 1938 and the California State Lands Commission was created. The Commission was created as an independent body consisting of three members.

Since 1938, the Commission has consisted of these same members: the Lieutenant Governor, the State Controller, and the Governor’s Director of Finance. The combination of the two principal financial officers of the state with two statewide elected officials ensures that decisions made by the Commission are fiscally sound and in the best interests of the state. Public awareness and participation are assured because Commission actions occur at properly noticed public meetings.

The California State Lands Commission provides the people of California with effective stewardship of the lands, waterways, and resources entrusted to its care based on the principles of equity, sustainability, and resiliency, through preservation, restoration, enhancement, responsible economic development, and the promotion of public access.

The California State Lands Commission is a recognized leader that champions equitable and sustainable public land management and balanced resource protection for the benefit and enjoyment of all current and future generations of the people of California.

We value diversity at all levels and are committed to fostering an inclusive environment where our employees from different backgrounds, cultures, and experiences are able to leverage their strengths and unique insights to further the Commission’s mission and thrive.