The Commission is processing two applications for floating offshore wind projects in state waters (see Figure 1. below) offshore of Vandenberg Space Force Base (formerly Vandenberg Air Force Base). The project applicants are BW-IDEOL (formerly IDEOL USA Inc.) and CADEMO Corporation (formerly Cierco). Both applications are for the construction, operation, maintenance, and decommissioning of floating offshore wind electrical generation. A summary of each application is included in the expanding sections below. Both applications will have to go through a comprehensive environmental impact review process pursuant to CEQA before staff brings any application to the Commission for consideration of a lease. A comparison of the main features of the two projects can be found in this table.

The Commission is in the initial stages of preparing an Environmental Impact Report (EIR) for the CADEMO project. See the Commission’s California Environmental Quality Act Documents webpage for more information. The Commission will pursue a separate EIR for the BW-IDEOL project at a later time. 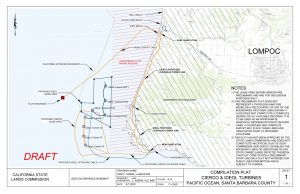 Next steps: Proceed with EIR 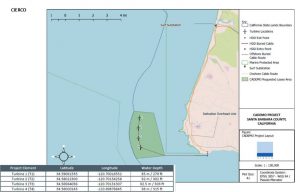 CADEMO Corporation is a renewable energy development company based in Palm Springs, California that has floating wind project activities in the United Kingdom. In August 2019, CADEMO applied to the Commission for a lease to develop an offshore wind demonstration project in state waters west of VSFB in Lompoc, Santa Barbara County, California. The CADEMO project would consist of the installation and operation of four floating offshore wind turbines that would be moored to the seafloor, the nearest of which will be 2.5 nautical miles from shore. Each turbine will be capable of producing 12–15 megawatts (MW) of renewable electricity, and a maximum of 60 MW could be generated from the four turbines. The four wind turbines would be connected in a series with inter-array cables, and a subsea export cable would be installed under the seafloor from the most southern turbine to an onshore cable landing site located south of Point Arguello within VSFB. An HDPE cable duct would be installed at the cable landing site using a horizontal directional drilling method. The export cable would eventually be pulled in through the duct from offshore to onshore and connected to a new onshore substation within VSFB. An onshore overhead power line would be installed from the new substation to the existing Substation N and would continue north to the existing Surf Substation.

The proposal is intended to be a demonstration project and therefore, focuses on testing existing engineering concepts for the floating foundations of the wind turbines. Each turbine will be supported by a platform base floating beneath the surface, which is more feasible than fixed-bottom foundations off the coast of California due to the deeper west coast nearshore waters. The floating turbine substructures have mooring systems that anchor them to the seabed. The CADEMO demonstration project will test the barge and tension leg platform technologies.

CADEMOhas committed to establish a fund for the full decommissioning of the project’s infrastructure and onshore overhead power lines at the end of the demonstration period. Construction of the wind turbines and floating platforms is expected to occur at the Port of Los Angeles and the Port of San Francisco. Construction staging of work vessels, equipment, and building materials will also occur at these ports.

Next steps: Proceed with EIR BW-IDEOL (IDEOL) is a renewable energy development company specializing in floating offshore wind technology and based in San Francisco, California. Since 2010, IDEOL has been involved in engineering floating foundations in France for offshore wind and, in July 2019, IDEOL applied for a lease to develop an offshore wind pilot project in California state waters near the Lompoc coast and VSFB. The project would involve the construction, operation, maintenance, and decommissioning of a floating offshore wind electrical generation pilot project consisting of up to four 10-megawatt (MW) floating wind turbines capable of generating up to 40 MW of renewable energy. This energy will be available to serve the VSFB and other California customers. The total lease area IDEOL is requesting for the floating turbines is approximately 5.2 square miles.

The system components would consist of floating foundations, mooring lines, turbine structures, inter-array electrical cabling, a submarine electrical delivery cable, and one substation. Each turbine would be supported by a floating foundation, in this case, a semi-submersible concrete barge, which in turn will be moored to the seabed. An inter-array electrical cable will interconnect the four floating wind turbines. A subsea export cable would be installed under the seafloor from the most southern turbine to an onshore cable landing site located south of Point Arguello. A landing pipe would be installed at the cable landing site using a Horizontal Directional Drilling (HDD) method. The export cable would be pulled in through the landing pipe from offshore to onshore and would connect to a new onshore electrical substation within VSFB. An onshore overhead power line would be installed from the new substation to the existing Substation N. IDEOL is proposing a second alternative for using the existing submarine cable from Platform Irene to the onshore Surf Substation.

IDEOL has researched all California harbors and port infrastructure to select an appropriate construction site for the construction and assembly of the floating wind turbines and platforms, and has identified Port Hueneme as their preferred port location.

Construction activities at the selected port would require coordination with port authorities and may be subject to additional authorization and CEQA analysis.

If a lease is issued and the project proves successful, IDEOL may seek to extend the lease and repower the project at the end of the lease term, however at the end of any final lease term everything would be decommissioned, removed from the site, and repurposed or recycled. Repurposing the floating turbines and foundations would involve transport via vessel towing. Recycling the floating turbines would occur in port facilities.

Staff has determined that using a combination of an “early public consultation” scoping approach with some preliminary project analysis is the best approach to the environmental review for these two projects. This preliminary environmental assessment is intended to provide preliminary insight on affected resources to help guide early public input on the Notice of Preparation (NOP) and scoping process, which is a precursor to preparing an EIR. Considering the extensive resource requirements of the EIR process, this expanded scoping and public outreach approach will help the Commission develop the appropriate project scope and analysis, and generate ideas for project alternatives, which will increase transparency and public participation as compared to a typical CEQA EIR process.

This approach will help with all the following components:

10/21/2021 (32) - Consider delegation of authority for the Executive Officer to solicit Statements of Interest for consultant services, negotiate fair and reasonable prices, and award and execute agreements for the preparation of environmental documentation and mitigation monitoring for two proposed offshore wind energy projects in the Pacific Ocean, near Vandenberg Space Force Base, Santa Barbara County.

RFQ for an environmental consultant, September 2022

Join this e-list to receive information on offshore wind applications in California waters.