Existing law requires lessees to pay a minimum 10 percent royalty rate on the gross value of steam or brines when no minerals are extracted (usually where the resource is used for heat or electricity generation). Leases issued by competitive bid have a maximum royalty rate of 16-2/3 percent, which is in addition to a biddable factor (typically a cash bonus or percentage of net profit). Existing law establishes a minimum 2 percent royalty rate on the gross revenue from the sale of mineral products or chemical compounds recovered from geothermal fluids (e.g., lithium, zinc, manganese).

The Commission’s leases in the Geysers are on lands that are known as school lands. Lease revenue and royalties are deposited into the California State Teachers’ Retirement System fund, rather than being deposited into the general fund. Information about these and the revenue they generate are available in our Annual School Lands Report. The Commission manages seven geothermal leases that span roughly 7,249 acres of land where the State owns 100 percent of the mineral interest, and two separate parcels (called agreements) totaling 896 acres where the State holds a 1/16th mineral interest. Geysers Power Co. and CPN Wild Horse Geothermal, subsidiaries of the Calpine Corporation, hold all seven leases as well as leases on surrounding federal and private lands. Collectively, the leases contain 100 production wells that supply seven power plants with steam. Twenty injection wells return about 75 percent (by mass) of the extracted fluids to the reservoir to maintain subsurface pressure levels, preventing subsidence and reservoir pressure decline. Steam production has been stable since the mid-1990s because of consolidated field operations and increased water injection into the reservoir. Nearby reclamation plants in Lake County and the city of Santa Rosa provide supplemental injection water to the field. The Geysers geothermal field currently produces about 28 million pounds of steam annually, generating about 198 megawatts of electricity annually. This supplies about 198,000 homes (at an average of 18 kWh/day per home) in the North Coast region. Royalty rates are 10 percent to 12.5 percent of the gross value of geothermal steam, which is calculated by multiplying the gross value of electric power with the agreed percentage of steam that began initially as 36 percent in 1999, increasing annually to a maximum of 42 percent of the value of electricity.

Most land around the Salton Sea is privately owned, and the State’s mineral ownership in this area is relatively small compared to the Geysers. The Commission manages five geothermal leases at the Salton Sea geothermal field that total 3,394 acres. ORNI 5 LLC, a subsidiary of Ormat Nevada Inc., holds two leases totaling 2,739 acres where the state owns 100 percent of the mineral interest. Cal Energy/Magma Power Co. holds two leases totaling 615 acres on land managed by the California Department of Fish and Wildlife for wildlife habitat and hunting. The two Cal Energy/Magma Power Co. leases are developed via a unitization agreement. Geothermal development is prohibited on the surface of the habitat. Hudson Ranch I Holdings LLC holds one lease that includes 40 acres and is the only lease located on sovereign land. Except for the ORNI 5 LLC leases which only authorize drilling, all revenue and royalties are deposited into the general fund. The geothermal reservoir underlying the field is liquid-dominated—the resource exists as high-temperature, hyper-saline brine (salt- and metal-laden water). When brought to the surface, a portion of the brine flashes to steam, which is used to generate electricity. The remaining brine is injected back into the reservoir. There are 10 power plants located on private lands in this area, with 437 megawatts of installed capacity. There are about 28 production wells in the field producing over 265 billion pounds of brine annually, and 41 injection wells reinjecting just over 220 billion pounds of produced brine. Efforts are underway to develop lithium and other metals from the geothermal brine. For more information on lithium development, including a factsheet, please refer to the California Energy Commission, Lithium Valley Commission website.

State Lands Commission Geothermal Leases in the vicinity of the Salton Sea. 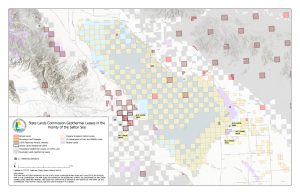 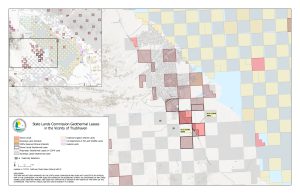 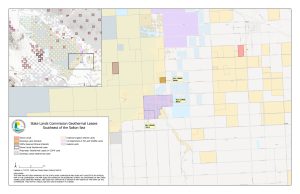