Grants of Land in California made by Spanish or Mexican Authorities 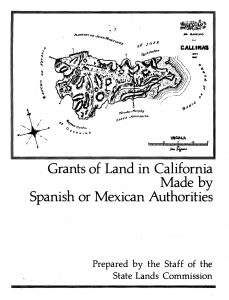 The colonization of California began with the Spanish Empire’s discovery of New Spain. Along with Mexico, the states of Texas, Arizona, New Mexico, California, and other lands, made up what was once known as New Spain.

California was one of the last of these Spanish territories to be occupied. The first Spanish colony to be established in California was the mission and presidio at San Diego. From this first settlement, the Spanish and Mexican governments founded four presidios, four pueblos, and 21 Catholic missions, along with granting vast amounts of rancho lands to private individuals.

Grants of Land in California made by Spanish or Mexican Authorities