Sacramento – Continuing its push to end a decades-long environmental crisis, the State Lands Commission announced today that it adopted a consensus resolution recommending actions for the federal government to take to eliminate transboundary flows in the Tijuana River Valley.

The resolution—to be adopted by several city councils and boards in the coming weeks—solidifies the most urgent needs that state and regional leaders request from the federal government to address the underlying causes of the sewage, sediment and trash that have contaminated Public Trust land and waterways in Southern California for decades.

“This resolution reflects our shared commitment to invest in solutions to prevent transborder pollution from sullying Southern California’s Public Trust lands,” said Lieutenant Governor and State Lands Commission Chair Eleni Kounalakis. “I am proud to stand with my fellow stakeholders in calling on the federal government to analyze and fund these critical infrastructure projects.”

The resolution identifies urgent actions needed from the federal level to address underlying causes of the sewage, sediment, and trash that have contaminated Public Trust lands and waterways for decades. The resolution requests that the federal government allocate funding to the U.S. EPA to carry out already identified capital projects; restore and maintain the chemical, physical and biological integrity of the Tijuana River Valley; and authorize and direct the U.S. EPA and the International Boundary and Water Commission to cooperate and expeditiously execute projects.

The resolution, adopted by the City of Imperial Beach on December 4, 2019 is scheduled for consideration by other entities on the following dates:

WHAT STAKEHOLDERS ARE SAYING: 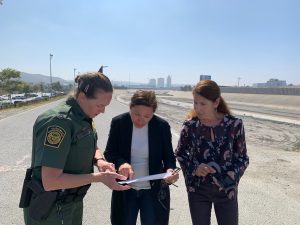 “The federal government is going to see vote after vote come out of the San Diego region in December with one clear message: it’s time for action. Our unified voice calling on Washington and Mexico City is gaining traction. This resolution shows the region is pushing in the same direction for federal action to stop this environmental crisis for good.” – San Diego Mayor Kevin L. Faulconer

“The County, along with many other partners in the region, has been fighting for a solution to stop these flows from affecting our residents. The adoption of this resolution by the jurisdictions on the front lines of this fight sends a strong message to the federal government that we know what is needed and we will not stop pressing for them to fund a solution to this ongoing problem.” – San Diego County Supervisor Greg Cox

“This joint resolution illustrates the unanimous support from local and state leaders to solve the ongoing cross border pollution crisis. We are not looking to support any half fixes to this issue. We all agree and endorse a proposed list of specific pollution control projects that are necessary for the Tijuana River and through this joint resolution we are now asking the U.S. EPA to move these projects forward.” – Imperial Beach Mayor Serge Dedina

“This resolution represents a unanimous call to action by our regional coalition for how the federal government should address the decades-old environmental catastrophe that compromises the health and safety of the CBP Agents, U.S. Navy SEALs, our local coastal economies and the everyday beachgoers on both sides of the border. The time to act is now.” – Coronado Mayor Richard Bailey

“The Port of San Diego requires everyone on tidelands property to comply with all applicable federal, state, and local environmental laws, that includes the Clean Water Act. The federal government is not exempt from its own law. It should be leading by example. Together with our regional, state and local partners, we look forward to hearing from the responsible federal agencies on when they will finally implement the projects we’ve identified to solve this crisis for the health and safety of our communities.” – Commissioner Dan Malcolm, Port of San Diego

“This resolution represents a united voice with all of our partners in the region. The agreed-upon list of projects will begin to address an environmental disaster that has impacted South Bay residents for far too long. We have identified the solutions, now it is time for the federal government to take action and ensure this problem gets solved.” – San Diego City Councilmember Vivian Moreno

“After decades of cross border pollution, the San Diego Water Board joins state and local agencies in a unified call for action to the federal government to achieve border environmental security by funding and building the border pollution control projects to capture and treat the largest volume of border wastes in the shortest time practicable.” – David Gibson, Executive Officer, San Diego Regional Water Quality Control Board

“One of the Surfrider San Diego Chapter’s primary goals during the last 18 months has been to work with agencies and the community to reach consensus on a Tijuana River Valley solution. We believe that the only missing piece towards progress is the support of the federal government. We are thrilled to stand with so many great agencies on this effort.” – Gabriela Torres, policy coordinator for Surfrider’s San Diego Chapter

Join this e-list to receive Press Releases from the Commission.