The lawsuit, filed by California Attorney General Xavier Becerra on behalf of the California State Lands Commission and the California Coastal Commission, contends that because the beach has been heavily used as a public beach since at least the early 1900s, the public has acquired access rights under the legal doctrine of implied dedication. California’s Constitution guarantees public access to all coastal beaches below the mean high tide line.

“California’s coastline belongs to everyone,” said Lieutenant Governor and State Lands Commission Chair Eleni Kounalakis.  “This lawsuit is a critical part of California’s ongoing efforts to ensure public access and to protect the public’s rights to access its golden shores.”

California Coastal Commission Chair Steve Padilla agrees. “This case goes to the heart of California’s public access mandate,” he said. “We cannot allow this to be chipped away each time someone purchases beachfront property – it’s a dangerous precedent for the future of public access in California.”

Martins Beach, a crescent-shaped beach, has been a popular spot for picnicking, fishing, surfing, and other recreational uses for more than a century. In the early 1900s the Deeney family purchased the property adjacent to Martins Beach but made no effort to discourage visitors from continuing to drive down and visit the beach.

Almost a century later, Khosla’s Martins Beach 1 LLC purchased the property and in 2010, locked the gate across the only road to the beach, posted “No Trespassing” signs, and hired security guards to keep the public out.  Since then the gate has not been consistently open.

The Surfrider Foundation filed a lawsuit in 2013, which established that the owners needed to obtain a permit from the Coastal Commission if they wanted to close the beach, but no permit has ever been obtained.

The state’s lawsuit filed this week asks the court to consider unexamined evidence and confirm that the public has the right to continue using Martins Beach. The Coastal Commission has spent several years conducting surveys of beach goers and collecting evidence of continuous public use from more than 225 respondents, including written accounts, photographs, personal journal entries and news articles, reflecting public use as early as back to the 1800s.

The State Lands Commission is the steward of the state’s tide and submerged lands, holding them in trust for current and future generations. The Coastal Commission regulates new development in the coastal zone, including changes in the use patterns of land, and is charged with protecting public access to and along the coast. Together, the two commissions serve as the state’s public access guardians and work closely to safeguard the public’s right to California’s panoramic coastline.

A copy of the lawsuit can be accessed here. Members of the public can share their history of use at Martins Beach by filling out this survey here. 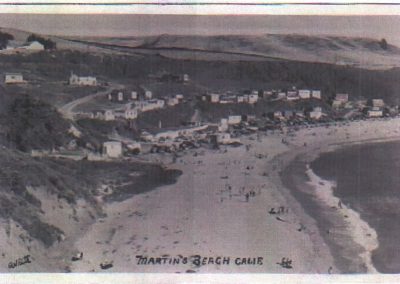 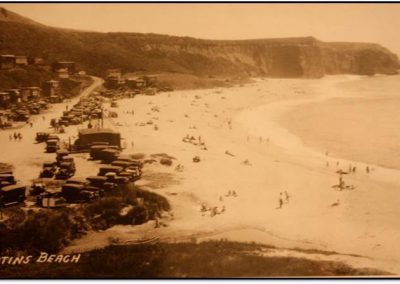 Martins Beach in the 1950s full of fishermen and families. 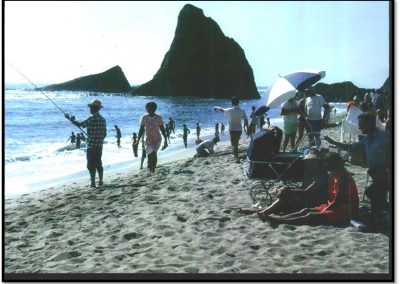 Martins Beach in 1970 full of families and fishermen.

Aerial photo of an empty Martins Beach in 2019