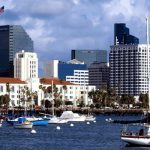 The Commission received a presentation from staff on a new report synthesizing sea level rise assessments submitted by 32 local jurisdictions, including major ports and harbors, as required by AB 691 (Muratsuchi, 2013). AB 691 was a pioneering effort that sought to address the risk and exposure to sea level rise at some of California’s most valuable public trust lands. The Commission’s new report, the culmination of nearly a decade of work, includes recommendations that can be adapted into future legislation. The report also includes recommendations to address disproportionate impacts on disadvantaged communities and emphasizes the importance of nature-based solutions while taking the unique circumstances of local areas into account.

The Commission received a briefing on relevant state legislation, including two seminal ocean protection bills, AB 1832 (Rivas) and SB 54 (Allen). AB 1832, which the Commission adopted a support position on earlier this year, would ban deep seabed mining in California, synchronizing the west coast states (Washington and Oregon previously passed seabed mining bans). SB 54, signed into law this past June, is the most comprehensive measure in the nation to address the plastic waste crisis. The briefing was important given how deeply intertwined ocean protection is with the Commission’s role in managing over 4 million acres of tide and submerged lands and the beds of navigable waterways, and given the scale of the plastic pollution crisis and how harmful plastics are to California’s waterways. Assemblymember Luz Rivas thanked the Commission for supporting AB 1832 and emphasized how valuable the bill is in protecting the seabed offshore California and the impact of California taking this step on global efforts to prevent deep sea mining. Senator Allen’s Chief of Staff, Tina Andolina, briefed the Commission on SB 54 and thanked the Commission for devoting time to this critical issue during its meeting.

The Commission adopted a proposed project and various alternatives, informed by the Feasibility Study, to analyze in the EIR for the Rincon Decommissioning Phase 2 Project. Phase 2 is to develop a decommissioning plan for the disposition of Rincon Island, the onshore facility, and the causeway. This includes the feasibility study adopted today and CEQA documentation, which is the next step following today’s action. In 2017, Rincon Island Limited Partnership quitclaimed three leases back to the Commission. The Commission has been working since that time to decommission the oil and gas facilities and, in June 2021, completed plug and abandonment of 75 wells onshore and on the Island. The final Feasibility Study recommends the development of an Environmental Impact Report that focuses its analysis on partial removal. The Commission’s action is an important milestone and ushers in a new chapter for the future of the Island.

The Commission disbursed the third and final round of funding to California ports to mitigate the negative economic impacts of the COVID-19 pandemic and assist with their economic recovery. The Commission’s expedient disbursements have been vital to ports, particularly those that are visitor-serving and tourism-reliant. The Commission has disbursed nearly $250 million to ports in the past year. In December 2021, the Commission disbursed the first allotment of funding, and the following April it disbursed the second allotment. Funding decisions were based on the amount of a port’s revenue impacts, direct costs related to COVID-19, and whether the port received funds from a county or city’s recovery funds or other sources. As the California Association of Port Authorities stated, “The Commission’s work to prioritize and quickly distribute this financial support has enabled our ports to continue to play a key role in the state’s economic recovery and resurgence. The State Lands Commission is a critical partner to our successes and the California Association of Port Authorities is deeply appreciative of the Commission’s efforts to ensure our ports could rebound from the COVID-19 pandemic and continue to serve our communities in California and beyond.”

The Commission’s next meeting is on October 25 at 1 p.m. You can sign up on our website to receive updates about future Commission meetings. Another great way to stay informed is to follow the State Lands Commission on Twitter. You can also watch a webcast of the meeting on Cal-Span.org.