The Becker #1 well, located on Summerland Beach in Santa Barbara County, first made history in the 1890’s when it was one of the first offshore wells drilled in the U.S. and is once again making history as one of the first of these vintage offshore wells to be permanently abandoned. The Becker well is notorious to local beach-goers as it has been the source of visible oil seepage for years. Approximate 60 shore side wells in the area have been successfully re-abandoned but no wells in the surf zone and beyond, that are known to be leaking, have been successfully re-abandoned before now. Although the Summerland offshore wells are considered shallow (between 300’ and 500’), and would be simple and relatively inexpensive to re-abandon in an onshore environment, the dynamic location of the Becker well – directly in the surf zone and subject to tides and wave action –greatly complicates the reabandonment process and significantly drives up the overall cost.

The California State Lands Commission (CSLC) commissioned InterAct PMTI (InterAct) in October, 2015 to complete Phase 1 Discovery of the Becker Re-abandonment project. Since no records were available to describe the wellbore, the purpose of Phase 1 was to excavate the Becker #1 well at low tide and assess the size and condition of the wellbore so that a re-abandonment plan could be engineered. With the well exposed, the following observations were made and are illustrated in the diagram below: 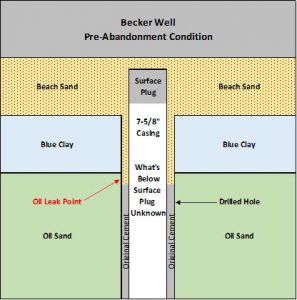 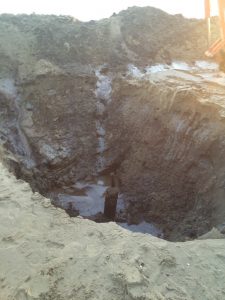 A subsequent engineering study evaluated several alternatives to the Becker #1 re-abandonment, including both onshore and marine approaches. Since the marine approach was only slightly more expensive to the shore-side approach, and involved the smallest project footprint and least environmental impact to Summerland Beach and community, it was selected as the preferred approach. Due to the high risks and costs associated with the re-entry of a 100+ year old wellbore with no records of what may lie below the surface, CSLC encouraged prospective bidders on the project to develop an abbreviated abandonment plan that would eliminate the high risks/costs associated with the conventional wellbore re-entry and focus more on the source of the leak path which was up the uncemented casing annulus.

InterAct’s concept for the re-abandonment was selected as the preferred approach as it could be completed expeditiously and within the $1.4 million budget. Below is a procedural outline/illustration: 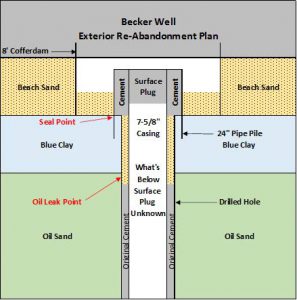 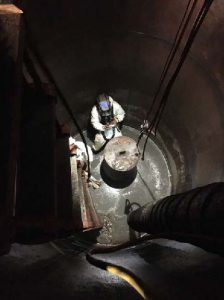 InterAct’s subcontractor, Curtin Maritime, mobilized their crane barge during the early hours of Monday February 26th. The cofferdam was removed 4 days later on March 1st after the well had been completely encapsulated. The project was completed on time, under budget, and without incident.