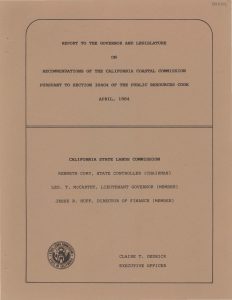 Renewed leasing of offshore oil and gas resources on State lands is at a standstill. Even though the State has invested $1.6 million in the process and the environmental documents have been found by the California courts to be full and complete, the program is now stalled by a new series of questions. They include the responsibilities of the Coastal Commission and the policies of the Coastal Act. But the fundamental question is really whether or not State oil and gas resources are going to be developed and if so under what conditions. If the program goes forward, it stands to bring in over $3 billion in nontax revenue over the next two decades.